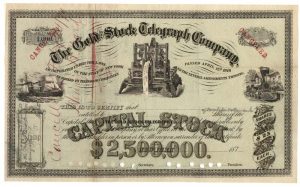 In the confused moments of its 1843 session, Congress appropriated $30,000 for Samuel Morse to develop an experimental telegraph line between Washington and Baltimore. This appropriation was the culmination of a long struggle by Morse to demonstrate the utility of his “electro-magnetic telegraph” and it set the stage for the introduction of instantaneous world-wide communication, an advance which, of course, has had a dramatic impact upon the course of history and of human endeavor. Morse, called “the father of the telegraph” and thus the father of modern, world-wide communication, conceived of the telegraph in 1832, and, by 1837, had developed a crude but working model. Few individuals were interested at this time, but one who was, Alfred Vail, joined in the construction of the Washington-Baltimore line. Still, years of disappointment followed even after Vail’s association with Morse and despite numerous successful small demonstrations of the telegraph’s viability. During this time Morse developed what is now known as Morse code, as well as what is considered his most brilliant contribution, the less “romantic” but absolutely vital electrical relay, which makes if possible to transmit electric current across great distances. Finally, upon congress’ appropriation, construction of the line began. By May 1844, the first telegraph line had been completed and, on May 24, 1844, Morse sent his now-famous message over the wire, “What hath God wrought?”. Waiting to respond in Baltimore was Alfred Vail. In the years that followed this success, Morse grew to be a wealthy man from his labors, and governments and institutions from around the world bestowed honors upon him.