The years following the America Revolution saw the United States grow and develop both socially and economically. The influx of immigrants brought new ideas which in turn spurred further economic growth. As the economy became more sophisticated, the need for better methods of transportation soon became evident to the industrial leaders and politicians alike. Turnpikes and canals were both not adequate to the task of moving large amounts of freight efficiently and this economic development was a slow and difficult process. The early railroad engineers and investors were truly blessed 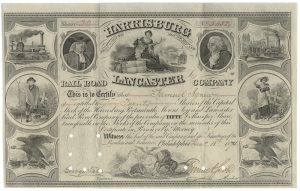 One of the Truly superb graphic certificates signed by Industrialist Thomas A. Scott

with the pioneer spirit. Countless investors lost their money on unsuccessful ventures. Their persistence, however led to the development of the entire continent and indeed, the Trans-Continental Railroad may have been the symbolic peak of railroad adventurism.

During the 19th Century the United States maintained by far the largest system of railroads in the world. Throughout their development, huge sums of money were required to finance construction and growth The result of these financings was not only the development of a nation, but a legacy of historically significant and graphically pleasing stock certificates and bonds. Collecting railroad certificates remains as one of the most popularly collected specialties in the field of Scripophily. Over many years, certificates of many historically important railroad systems have become available to the public via institutional and museum deaccessions. These have provided railroad enthusiasts with an extraordinary opportunity to collect a large variety of interesting subject material.