The earliest attempts at mining in North America date back to the early 1600’s, shortly after the arrival of the Jamestown colonists in Virginia. In 1608 a small shipment of a few barrels loaded with iron ore were sent to England by John Smith, leader of the Colony. Since this time, North America has proven to be one of the most resource rich continents on earth. 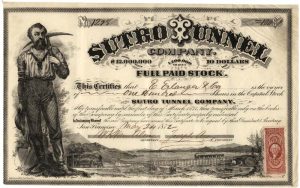 Countless companies were formed to exploit the vast opportunities that became available to them as improved transportation allowed for affordable movement of mined resources for processing and sale into faraway markets. Most of these companies issued securities to fund their capital intensive and risky operations. Many companies issued certificates with elaborate views of mining operations in action giving shareholders a feeling confidence in their investment. As a result, today collectors of mining certificates have a large number of graphically interesting and historically significant examples available to them. Many have chosen specific topical themes to specialize in such as gold, silver or coal mining. Some collect mines located in specific states , regions or territories. Wherever your interests may lie in mining, Scripophily has much to offer the collector.