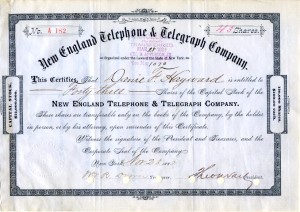 Theodore Newton Vail (July 16, 1845 – April 16, 1920) was a U.S. telephone industrialist. Born in Minerva, Ohio, he served as the president of American Telephone & Telegraph (AT&T) between 1885 and 1889, and again from 1907 to 1919. He convinced President Woodrow Wilson that the telephone as a medium of communication would spread more rapidly if it was brought under one monopoly so as to ensure uniform provision of services throughout the country. He called this “one system, one policy, universal service”.

Theodore Vail was one of AT&T’s most far-sighted presidents. He oversaw the building of the first American coast to coast telephone system, and it was his dedication to basic science that initiated a new research arm for AT&T called Bell Laboratories. During his tenure, he set up the Western Electric Company, a division of the company which built telephone equipment.

Vail built the first long distance system, from Boston, Massachusetts to Providence, Rhode Island in 1881. In 1914, the first transcontinental line across the US became operational by AT&T and Vail made the first phone call from New York to San Francisco and a year later phone service was available to Europe.

Scripophily (scrip-ah-fil-ly) is the name of the hobby of collecting old stock and bond certificates. Certificate values range from a few dollars to more than $500,000 for the most unique and rare items. Tens of thousands of Scripophily buyers worldwide include casual collectors, corporate archives, business executives, museums and serious collectors. Due to the computer age, more and more stock and bonds are issued electronically which means fewer paper certificates are being issued. As a result, demand for paper certificates is increasing while supply is decreasing.

Scripophily.com – The Gift of History is the Internet’s leading buyer and seller of collectible stock and bond certificates and have items on loan for display in the Smithsonian’s Museum of Financial History in New York. Our company has been featured on CNBC, USA Today, Associated Press, Reuters, Nightline, Today Show, Baltimore Sun, and Washington Post and in many other media publications. The company also offers the World’s #1 old stock research service at OldCompany.com and offers high resolution scans for publications. Scripophily.com has over 17,500 selections on its website.

Scripophily.com / Old Company Research Service, founding member of the Old Stock Exchange, is the successor company to all material published by the Marvyn Scudders Manuals, the Robert D. Fisher Manuals, R.M. Smythe Stock Research Service, and the Herzog & Co., Inc. obsolete research services. These services have been performed continuously for over 136 years since 1880.

Scripophily.com and Old Company Research Services was founded by Bob Kerstein (Bob.com). Bob is a CPA and CGMA, and has more than 39 years of senior management experience in the Cellular, Cable TV, Satellite, Internet, Professional Sports and Entertainment Industries. Bob is also the President of the Professional Scripophily Traders Association (PSTA) and co founder of the American Stock and Bond Collectors Association.