Stock and bond certificates and shares are more than mere representations of wealth or financial gain. More than that, they are reflections of human endeavor, industrial expansion and the growth of this nation. Each has its own unique and fascinating story to tell. With those important points in mind, it is both interesting and useful for collectors and investors to be aware of historical background of companies that have issued stocks or bonds to finance their development and growth.  This first issue of the “Stock and Bond Investment Quarterly” will discuss a perennial favorite of many types of collectors; railroad companies. 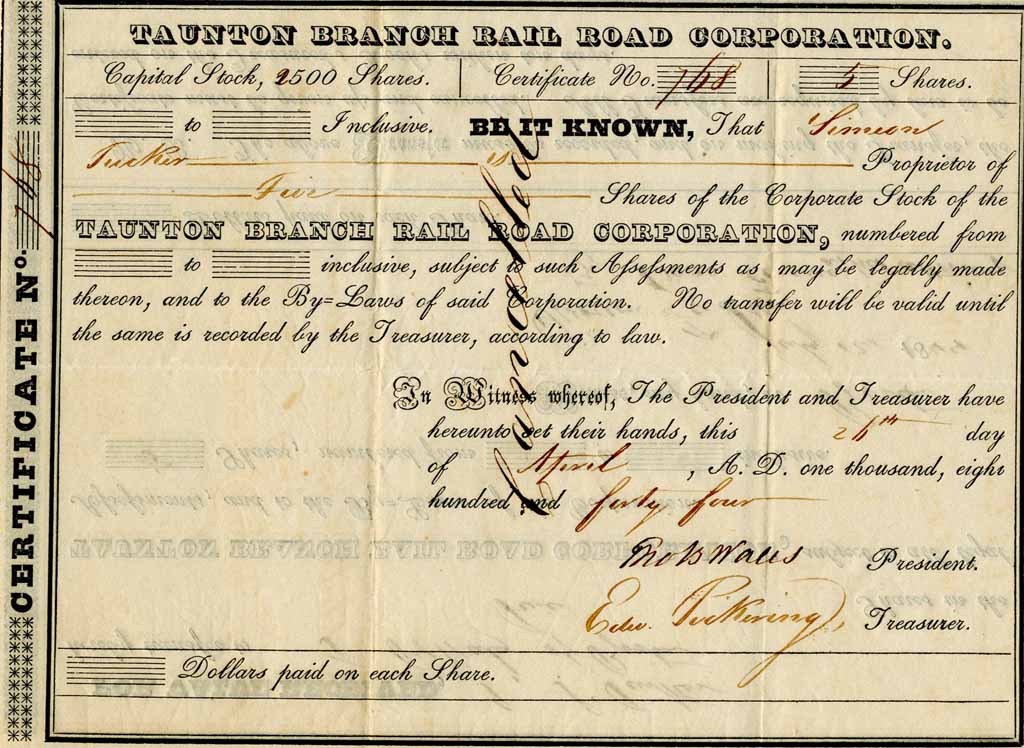 This company was incorporated in April 1835, to construct a railroad from Taunton to Mansfield on the Boston and Providence line. Construction began that year, and was completed in August 1836.  On July 2, 1840, the New Bedford and Taunton Railroad was completed, and connected with the Taunton Branch.  Both railroads operated under the same management.

The original issue of capital stock amounted to $250,000 for the Taunton Branch. Actual construction costs overran that amount slightly at about $256,000. The line was short, running just over eleven miles. The railroad began paying dividends three years after completion, and within six years was paying a tidy six percent return on investment, a rate it was able to maintain for a number of years. 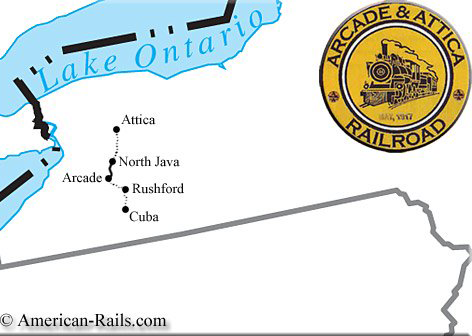 The Attica & Allegheny Valley Railroad was succeeded by the Arcade & Attica Railroad.

Unlike the Taunton Branch Railroad Company already discussed, this railroad seemed doomed from the outset.  Incorporated in November 1852, only about twenty-five miles of track were graded between Attica and Arcade during 1853 and 1854. In February 1856, the railroad was sold upon foreclosure of its mortgage. 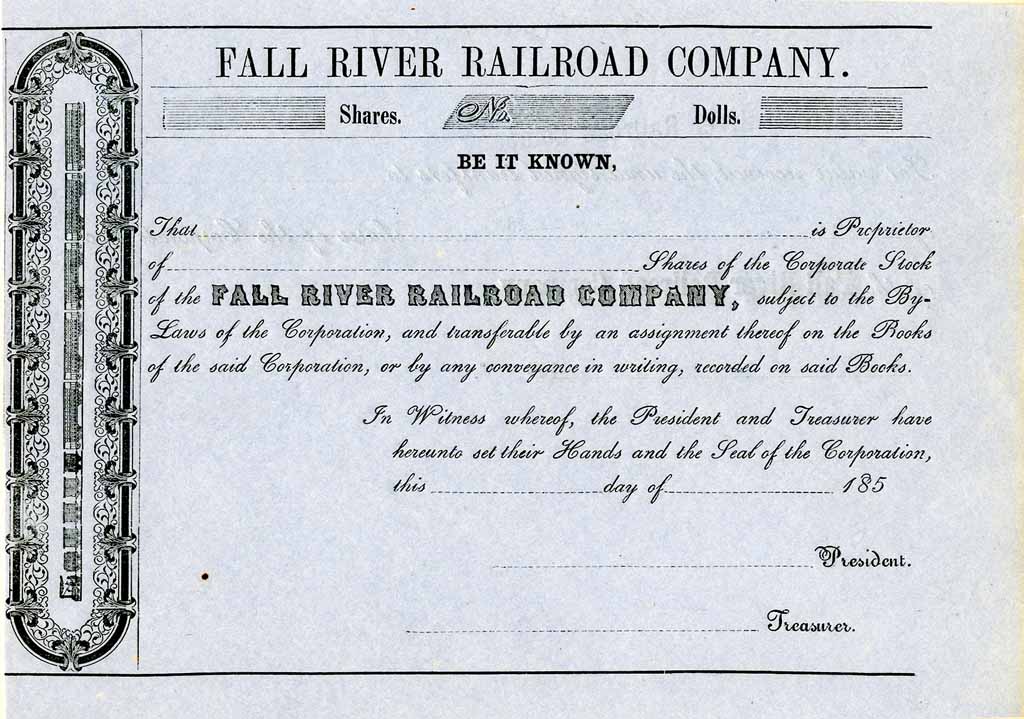 This particular railroad was formed by the consolidation of three separate lines: the Fall River Branch, the Middleboro, and the Randolph and Bridgewater Companies. The Fall River Branch was incorporated in March 1844, to construct a line from Fall River to Myrick’s Station. Both the Middleboro and the Randolph and Bridgewater Companies were formed in March 1845, the former to construct a railroad from Bridgewater to the Fall River Branch at Myrick’s Station, and the latter to build a line from Bridgewater to the Old Colony Railroad in Braintree.  The three merged in August 1845, following the successful completion of their respective segments of the entire line.  In April of the following year, the merger was granted official sanction by an act passed by the state legislature.

Share capital of the three companies totaled slightly over $1,000,000, a significant investment for that era.  Construction of the entire line to its junction with the Old Colony was completed in December 1846.  The entire line covered forty-two miles.  Nearly a decade later in 1854, the Fall River and Old Colony Lines were consolidated, thus forming the Old Colony and Fall River Railroad. 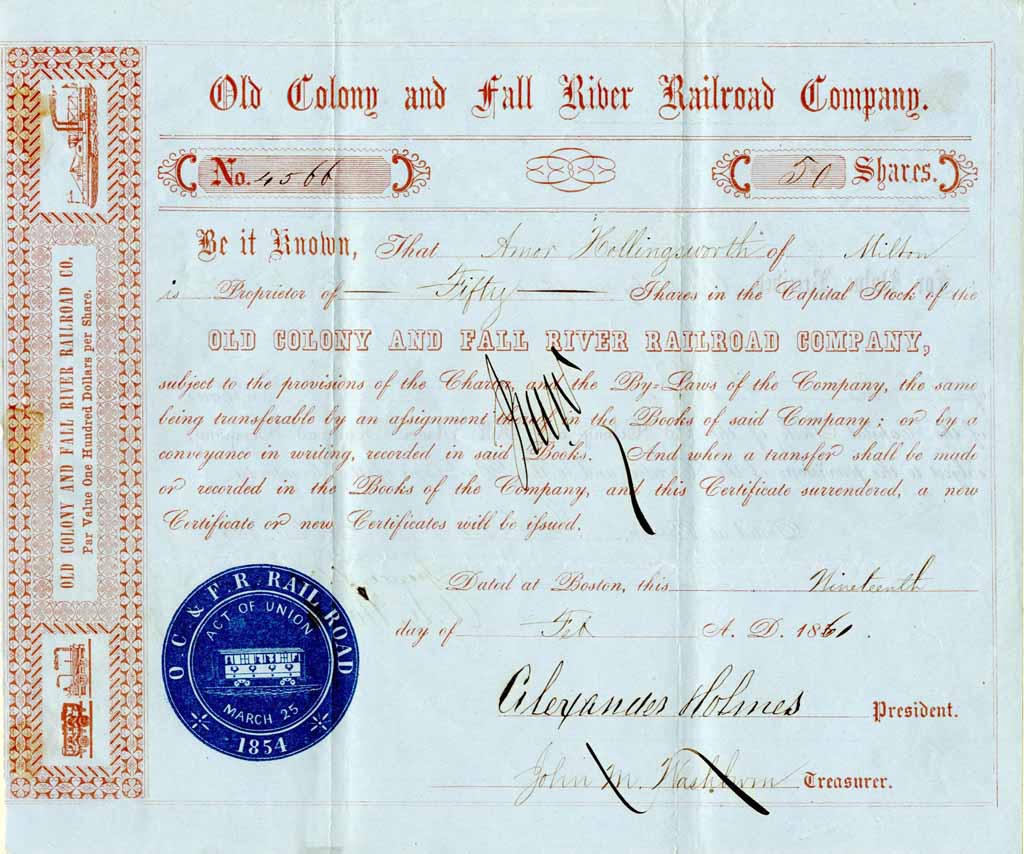 This merger was authorized on March 25, 1854.  The total length of road operated by the company totaled about ninety miles.

One individual, Richard Borden, played an important role in the development of the Fall River Railroad and also the subsequent merger with the Old Colony.  Born in 1795 in Fall River, Borden was one of the early industrialists of the area. Following the War of 1812, Borden became involved in shipbuilding, cotton milling, and ironworking, lucrative businesses, which expanded rapidly throughout the 1820’s and 1830’s. The Fall River Iron Works, in which he held a major interest, was created in 1821 with an initial capital investment of $18,000. By 1845, the business was worth almost one million dollars, and boasted an ironworks valued at half a million dollars.

Rapid, cheap transportation of materials and finished goods was naturally a source of considerable interest and concern to Borden. To that end, and mainly through his personal efforts and financial backing, the Fall River Railroad Company began construction in 1844, and was completed the following year.  With the creation of the Fall River and Old Colony Railroad in 1854, yet another venture which was due in large part to Borden’s backing, the Fall River area (and Borden) achieved an important goal – a direct rail line to Boston. Not surprisingly, Borden served on the new line’s board of directors for several years during the 1850’s.

Chartered in 1847, construction began in 1848, and the entire twenty-two miles of track running from Great Barrington to Pittsfield opened on January lst, 1850.  The Housatonic Company took a perpetual lease of the railroad in the same month in exchange for a seven percent rent based upon the total construction cost of about $450.000. The Housatonic Company operated the line successfully for a number of years, consistently meeting its annual rent charge without difficulty.