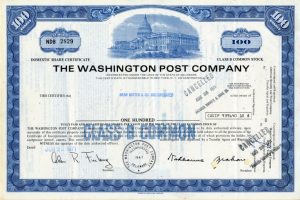 The Washington Post is currently featured in the movie “The Post” with Meryl Streep staring as Post publisher Katharine Graham. The Post published the Pentagon Papers in 1971 when Katharine Graham risked their IPO over what she felt was fake news being presented by the U.S, Government regarding the Vietnam War.

Beautiful engraved stock certificate from the Washington Post Company issued in 1971. This historic document was printed by American Bank Note Company and has an ornate border around it with a vignette of the capitol building and President George Washington. This item has the printed signatures of the Company’s President, Katharine Graham and Secretary, Alan Fineburg and is over 47 years old.

“The Post” film takes place in 1971 and chronicles how The Washington Post defied the Nixon administration to publish news accounts based on the Pentagon Papers, a secret government study about the Vietnam War.

This beautifully engraved stock certificate is from the Washington Post Company and was printed by American Bank Note Company with an ornate border around it with a vignette of the capitol building. This item has the printed signatures of the Company’s President, Katharine Graham and Secretary, Alan Fineburg and is over 47 years old.

The Washington Post Company history dates back to 1877, when the Post was first published. The Washington Post Company was incorporated in the District of Columbia in 1889, and remained a District of Columbia corporation until it changed its state of incorporation to Delaware in 2003. It was a company, trading on the New York Stock Exchange that went public in 1971. The company is headquartered in Washington, D.C. near the corporate offices of Scripophily.com.

The newspaper’s slogan is, “Democracy dies in darkness”. Daily editions are printed for the District of Columbia, Maryland, and Virginia. The newspaper has won 47 Pulitzer Prizes. In the early 1970s, in the best-known episode in the newspaper’s history, reporters Bob Woodward and Carl Bernstein led the American press’ investigation into what became known as the Watergate scandal; reporting in the newspaper greatly contributed to the resignation of President Richard Nixon.

In 2013, its longtime controlling family, the Graham family, sold the newspaper to billionaire entrepreneur and Amazon.com founder Jeff Bezos for $250 million in cash. The newspaper is owned by Nash Holdings LLC, a holding company Bezos created for the acquisition.

Katharine Graham (Kay Graham) was one of the most powerful women in American media. Her mother, Agnes Meyer, was an educator and her father, Eugene Meyer, was a publisher. He purchased The Washington Post in 1933, and Katharine Meyer began working for the Post five years later. She married Philip Graham in 1940, and in 1945 left the Post to raise her family. In the next few years Philip Graham became publisher of the Post and bought out Eugene Meyer’s voting stock. During this time the Washington Post Company also acquired the Times-Herald and Newsweek magazine.

From 1973-1991 Graham, known to many as “Kay,” was board chairman and chief executive officer of the Washington Post Company, and remained Chairman of the Executive Committee until her death.

Under Katharine Graham’s leadership, The Washington Post became known for its hard-hitting investigations, including the publication of the secret Pentagon Papers against the advice of lawyers and against government directives, followed by the Woodward and Bernstein investigation of the Watergate scandal. For these reasons, she and the newspaper are sometimes credited with bringing about the fall of Richard Nixon.

Stock certificates are collected and given as gifts because of their historical significance, beauty and artwork, autographs, notoriety, as well as many other factors. The supply of new certificates reaching the collector market has been substantially reduced due to changes in state laws and stock exchanges rules. Many companies are no longer required to issue physical stock and bond certificates, a process called “dematerialization.”

Scripophily (scrip-ah-fil-ly) is the name of the hobby of collecting old stock and bond certificates. Certificate values range from a few dollars to more than $500,000 for the most unique and rare items. Tens of thousands of Scripophily buyers worldwide include casual collectors, corporate archives, business executives, museums and serious collectors. Due to the computer age, more and more stock and bonds are issued electronically which means fewer paper certificates are being issued. As a result, demand for paper certificates is increasing while supply is decreasing.

Our company has been featured on CNBC, USA Today, Associated Press, Reuters, Nightline, Today Show, Baltimore Sun, and Washington Post and in many other media publications. Scripophily.com has items on display in museums around the world.

Scripophily.com has partnered with The Museum of American Finance, an affiliate of the Smithsonian Institution, with an educational program, Sharing Stocks, to place primary source documents in local classrooms. Scripophily.com (OldCompany.com) and Scott J. Winslow Associates, Inc. have sponsored free stock certificates for social studies teachers throughout the New York area.

Scripophily.com /Old Company Research Service, founding member of the Old Stock Exchange, is the successor company to all material published by the Marvyn Scudders Manuals, the Robert D. Fisher Manuals, R.M. Smythe Stock Research Service, and the Herzog & Co., Inc. obsolete research services. These services have been performed continuously for over 138 years since 1880. We are the leading provider of authentic stock certificates, autographs, and old company stock research services.

Scripophily.com and Old Company Research Services was founded by Bob Kerstein (Bob.com). Bob is a CPA and CGMA, and has more than 42 years of senior management experience in the Cellular, Cable TV, Satellite, Internet, Professional Sports and Entertainment Industries. Bob is also the President of the Professional Scripophily Traders Association (PSTA), Co Founder of ScripophilyUSA.org and a member of the International Bond and Share Society.